What If Insurance Denies Your Claim? 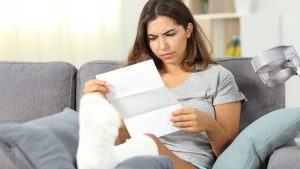 After being involved in an accident, one of the first things an accident victim should do is report the incident to their own insurance company (insurer). The insurer will then submit a claim, subject to the circumstances of the case, with either their own claims department or the other party’s insurer. Insurance companies give immediate approval in some cases and may help cover the costs of medical bills and repairs. However, accident victims can find themselves with no protection if their insurance company denies their claim. Fortunately, if their claim has been denied they are not without help or protection.

Insurance claims consist of two main types. They are first-party and third-party claims. If you file with your own insurance company, it is a first party claim, while filing with another person’s insurance company is a third-party claim. Typically, whoever was at fault in the accident will determine the type of claim that an accident victim will file. Every person who is involved in an accident should report it to their own insurer. If the other person was at fault, a claim should be filed with the insurer of the person who caused the accident. Sometimes, both parties can be at fault, then each person’s percentage of fault will be determined.

There are numerous reasons an insurer will use for denying a claim. It could be that a person may have taken too long to file a claim, or they failed to submit to a requested medical examination. A denial may occur if the type of accident is not be covered under the policy. Fortunately the claimant has a chance to file an appeal when claims are denied, although depending on the standard procedures of each company, the appeals process will differ. When an appeal is unsuccessful, if the claimant believes that the insurer is in breach of its contract, violated the insurance code, or was implicated in bad faith insurance practices, the claimant can file an appeal with the Washington State Insurance Commissioner or bring a legal action against the insurance company.

If all appeals have been exhausted, or if the claimant received an unfair settlement offer, there is the option of filing a legal action against the other driver. The injured party may be able to collect compensation for medical expenses, lost wages, damages for pain and suffering and property damage, and by filing a successful personal injury suit.

Get Legal Help with Denied Claims

If your claim for compensation after a recent accident was denied either by your insurer or the at-fault party’s insurer, contact Cunnane Law in Edmonds. We serve all of Washington state, and we are ready to continue fighting for you until you’ve received all the justice you deserve.

Note: This information was provided not for any specific claim and is written in broad and general terms and may not be the right path to follow for a particular claim or case. This information is not intended to create an attorney client relationship. It is always best to receive direct legal counsel for your legal issues. It is never too early to call the attorney, but it can be too late.